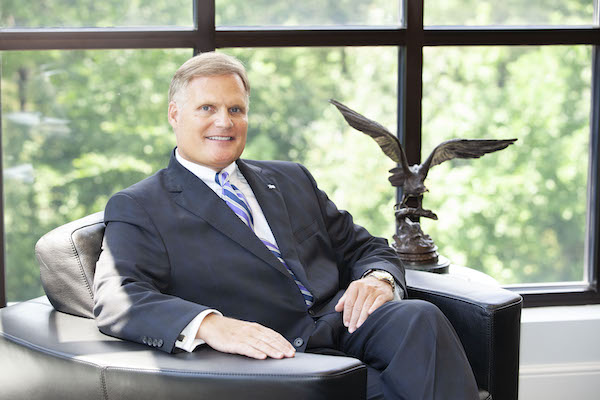 In 1988 I found myself with a difficult decision to make — either sell my agency or merge my agency with another. Unfortunately, my decision was not by choice, but by necessity.

The reason I had to make such a drastic decision was because I needed to represent the "Blue Chip" companies in order to continue to compete and see my agency grow. I realized that having a contract with only one of these companies was simply not enough.

But I also realized that if I attempted to bring in another carrier, I would risk damaging the relationship I had with my existing carriers.

Having received some good advice from a trusted friend in the industry, I decided that the last thing I wanted to do was to sell or merge my agency. I took the risk and brought in an additional carrier. Within 12 months, I was notified by my lead "Blue Chip" carrier that it was pulling out of my agency. My termination was not due to profitability; it was due to not meeting their mandated growth objectives. This was a carrier I had represented since 1979 and with which I had built a book of business from scratch to over $700,000 in premium. I had excellent growth and profitability, but the company was upset because I was placing the majority of my new business with my new company.

I felt this wasn't right and came to the realization that if this could happen to me, it was happening to other agents as well. I made a commitment to myself at that time that if I were ever in the position to help others in similar situations, I would do so.

During the next five years, with the help of many people and a lot of long hours and hard work, my agency premium volume grew from $1,500,000 to over $20,000,000. Within the framework of that agency operation, the initial concept of Smart Choice was formed.

Smart Choice was launched in 1994 with a handful of dedicated agents in North Carolina. Through their efforts and the efforts of many dedicated individuals in my retail agency, Smart Choice has grown to help thousands of agencies that are now realizing its benefits across the country. Today, Smart Choice is supported by not only the top "Blue Chip" companies in our industry, but also by strong regional carriers in each state.

Smart Choice agencies access the benefits of having lucrative markets that pay top commissions, but they also have the support of seasoned veterans in their states to work with one-on-one. This support group guides agents every step of the way.

I believe that the agencies we are fortunate with which to be associated are simply the best in the industry. Many top Smart Choice agencies believed only a few short years ago that they were destined to be the little agency in town, known for writing primarily the non-standard customers in the community. Many of these agents believed that they simply did not have what it takes to represent the top carriers in our industry. They now know that is not true. Having gained access to competitive markets, training, and encouragement, they have risen to the top in their communities.

This is what we mean when we talk about the "Freedom to Succeed." We believe that the only things keeping you from reaching your full potential as an agency owner are having the best markets in place and having an association with a team of seasoned veterans who can help keep your business plan on track.

The "Freedom to Succeed" is also about putting you back in control of your agency—it is not about being controlled by the companies and vendors you represent. While we believe it is imperative to meet, and hopefully exceed, the annual growth and productivity objectives of each of our carriers, it should not come at the expense of agents being unable to help their customers make the right buying decisions.

We are able to meet and exceed our annual carrier objectives by working with thousands of agencies, all doing their parts, according to their business goals. Many Smart Choice agencies consistently generate a steady flow of profitable business for our participating carriers. Others exceed their own expectations by experiencing rapid growth.

The Smart Choice model allows agents to grow at a rate with which they are most comfortable while maintaining control of their agencies and maintaining strong relationships with their customers.

I realize that customers' needs come first. I also know that the relationship and trust that you and I have worked so hard to establish with our customers is largely responsible for where we are today.

Being forced to grow your agency at the expense of losing touch with your customers is not right and will not serve you, your customers, or the carriers in the long run.

What Smart Choice is all about is helping you reach your full potential on your terms and on your timetable. Please call us to see if we can help you gain access to the top markets in your state, and let us work with you to develop a business plan that will allow you to one day retire with the financial resources to enjoy your retirement years.

I wish you the best and hope that one day our paths will cross so that you can share with me the opportunities, challenges, and rewards that have come to you by being part of one of the most rewarding opportunities in the business world.