Bill had decided that Harold, his prospect, was not going to get away. He was going to get the sale no matter what. Now, driving to Harold’s office, Bill reviewed all of the things he’d done to date.

It all began three months before when Harold took Bill’s phone call. The call did not go as smoothly as Bill would have liked, but after fifteen minutes on the phone, Harold caved in and agreed to come down.

Not that it surprised Bill, but Harold broke three appointments over three weeks. Finally he showed up one afternoon totally unexpected. That didn’t daunt Bill. After Bill spent two hours trying every which way to close, Harold left saying that he’d have to think about it.

Bill rose to the occasion by sending a different brochure a week for five weeks, each followed up by a lengthy phone call. Still Harold hadn’t closed, but Bill knew that the sale was near.

So Bill took Harold to lunch and spent another two hours. Still no sale. But Bill got Harold to agree to an appointment at Harold’s office. And now Bill was headed there to make the sale. I can smell the close, thought Bill.

Three hours later, Bill stumbled out of Harold’s office. No sale and Harold was less than pleasant when the parting came. I guess, thought Bill, Harold won’t buy.

One of the most destructive sales myths in circulation is how the “bulldog” insurance agent finally got the contract, the deal, the sale, after months of constant work. This myth is held up as the epitome of what sales is all about. Well, if the deal is worth millions, and the commission is worth hundreds of thousands, then perhaps there is some worth in doggedly pursuing the prospect.

For the vast majority of insurance agents, the sale is not worth hundreds of thousands in commissions.

One interesting statistic is that the average sales commission in this country is around two hundred dollars or less.

If you keep track of the hours spent trying to sell all of your prospects, and then at the end of the month divide the total hours into your commissions for the month, you will find what you make per hour. If you feel the dollar per hour figure is ridiculously low, consider the fact that you need to get a “no” as quickly as possible and move on to another prospect.

Instead of waiting until the end of the sales approach to find out if you are going to get a “no,” why not take care of it right at the beginning?

“Harold, appreciate you coming by today to look at my products. Before we go any further, I want you to know that at any time you can say “no,” and it will be over. Can we agree on that?”

The only possible answer you will receive is a “yes.” The pressure is off of you to ask the question of whether or not the prospect will buy. At any time during your sale, you simply say, “Harold, at the beginning we agreed that if you want to say “No,” it’s OK. Should I continue?”

If Harold says “No,” you are now free to move on to a prospect who is better qualified to say “Yes.” In addition, even though Harold didn’t buy from you, you and he both have each other’s respect. Will Harold recommend you to someone who might buy at this point? If you ask him right then and there, he probably will.

When a prospect tells you “No,” you now have the opportunity to spend productive time finding a prospect who will say “Yes.” 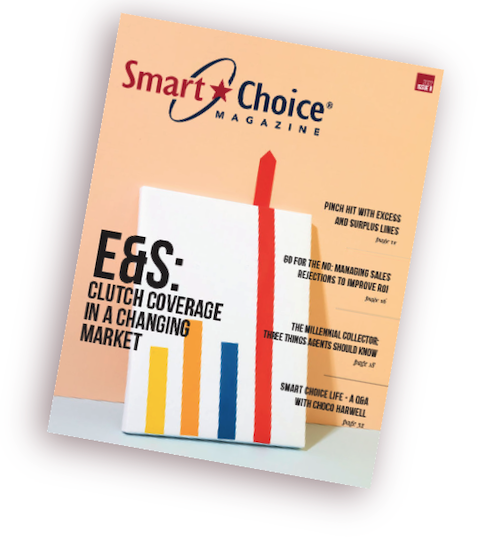 E&S business has surged in the last one to two years due to the firming market as a result of economic uncertainty, inflation, low interest rates, and more. And now is the time to seize
the opportunity to bring on more clients by offering diverse and custom solutions through these types of markets. Check out the 2022 Issue 2 of Smart Choice Magazine for tips on how.