Put the Phone Down 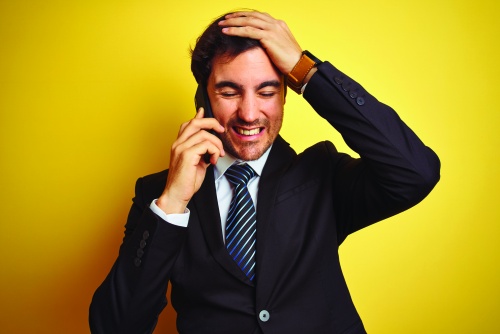 Oh my God, thought Greg, it’s past eleven, and I haven’t gotten the preliminary proposal done. Where did my morning go?

And for a moment, he realized that he had been on the phone non-stop since getting into the office at 8:00 a.m. Except for a quick dash to the coffee pot, he hadn’t left his desk. In fact, as he tilted the mug, he saw that most of the coffee was still in it.

“Who did I talk to?” he wondered aloud.

Well, the last call was from my wife reminding me to take the car in tonight. Okay. The one before was from that vendor who wants me to attend the trade show. Actually, she called me twice this morning. Then there was that message from someone I never heard of. Yeah someone named William Bails. Called him back and wound up with voicemail. I called him twice. Or was it three times. Wonder if that’s a new prospect?

Just then the phone rang, and Greg’s arm shot out. As the first ring was fading, he answered. Turned out to be a call from one of the other salespeople wanting to know if he’d meet him for lunch. As he put the phone down, he noticed it was now just past 11:30 a.m.

“Couldn’t have been on the phone that long,” he said to himself.

Looking over his daily plan, he decided that there was no way he’d get the preliminary proposal done at the office. Might as well collect all the stuff and take it home tonight. At least then, he thought, I won’t be interrupted so much.

Better call Jim Williams, he thought. We have that Rotary meeting set up for next Wednesday. Want to make sure that it’s still on. Good place to maybe do some business. Then after lunch I’ll try this William Bains person again. Never know with one like that where it will lead.

Just then the phone rang again. For a second, the thought flashed through his mind that he was like some robot programmed by the ringing bell, but then the thought faded.

“Hi, this is Greg. How can I be of assistance?”

Greg spends another day not getting done what he had planned on doing. His daily plan of tasks to accomplish, which he makes at home before coming to work, never gets finished.

Unless your job is to make one call after another, in other words you are a telemarketer, then being on the phone all day or most of the day is robbing you of productive work time.

Unfortunately, one of the most popular myths of a successful salesperson is just that, being on the phone all day. The phone has been surgically implanted in your ear.

Why do so many salespeople fall victim to this myth? Salespeople, by their nature, like to socialize. The phone is a great way to do it. Everyone likes to be informed and feel involved. So do salespeople. And if no one screens incoming calls or texts, then every call or text is put through.

And perhaps the biggest reason why salespeople trip over each other to answer the phone whenever it rings is that you never know if this call is going to be a sale. If you aren’t available every minute, you might lose the “big one.”

The first step in putting the phone down and making more money, is knowing how you use the phone. And right now you have no idea!

For a period of five working days, carry around a little pocket-size spiral notebook and whenever your hand touches the phone, jot down the caller or the person you called, the purpose, and how long you were on. On the sixth day review this record. How many calls really had a direct relationship to making sales? Probably less than 10 percent. Now add up the time you spent on the other 90 percent. Frightening amount, isn’t it?

How many were purely social calls?

What to do about this? Screen your own calls by establishing a pre-set time limit for yourself. Set a timer for three minutes. At the beginning of the call, politely tell the other party you are limiting yourself to three minutes. Now stick to it.

The second thing you should do is establish a “no phone time” every day. Use this time to work on tasks and projects you need to accomplish.

Now keep track of your phone habits for another five days. Look at how much more time is spent on sales. 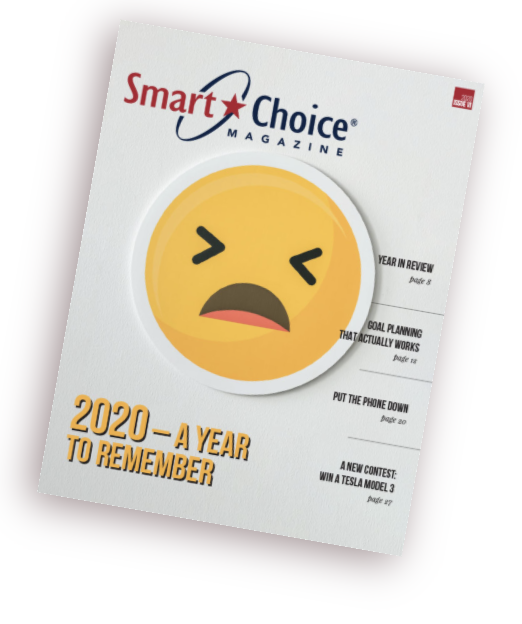 Despite 2020 being one of the most irregular years of our lifetimes, both personally and professionally, Smart Choice, our agents and carrier partners, have managed to succeed together. From double-digital revenue growth to our company's highest contingency sharing year to date, we and our partners have hit some really incredible milestones this year. Check out what else we achevied together in the 2020 Issue 6 of Smart Choice Magazine.